Breaking down the COVID-19 numbers: does Québec compare to the rest of the world? 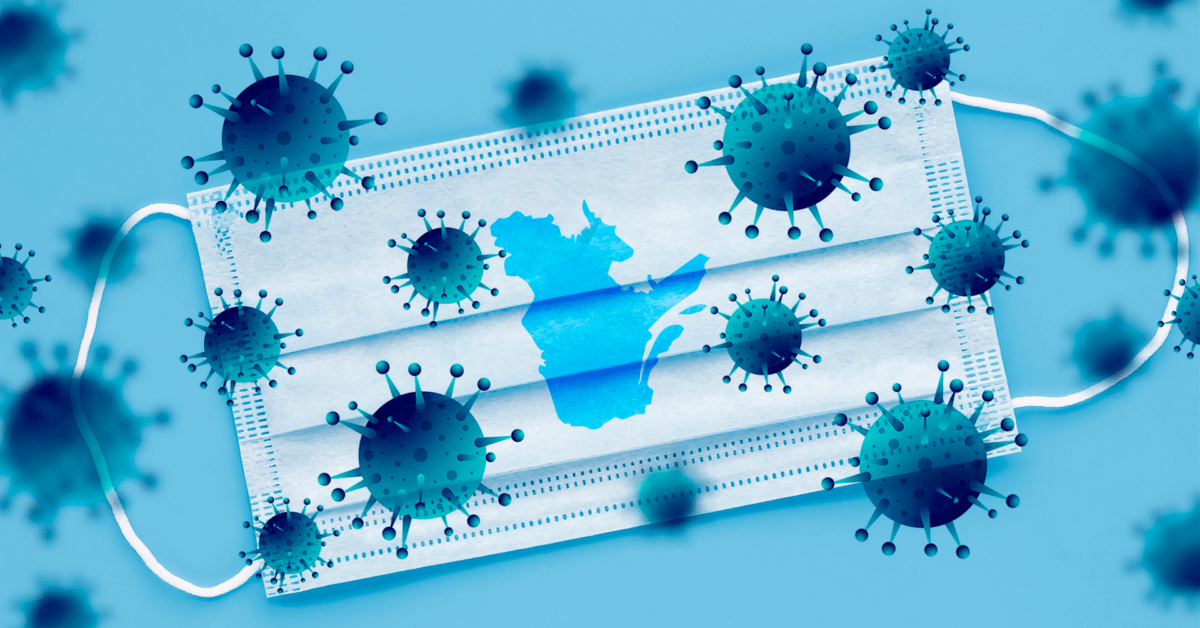 Simply put, yes. It is possible to compare the COVID-19 death rate of Québec to those of other states if using the right basis for comparison.

No one will deny that Québec, especially the Greater Montreal area, is the COVID-19 pandemic epicentre of Canada. The thousands of deaths that happened in CHSLDs are a sad reminder. However, it takes a lot of bad faith to state that Quebec has one of the worst coronavirus mortality rates worldwide.

To portray the situation in such manner is preposterous, especially as we have seen images of overstretched hospitals in Alsace (French only) and in Paris; the dead bodies piling up in northern Italy and in Madrid; and the refrigerated trucks lined up in New York to receive the corpses coming from hospitals by dozens. Not to forget that some systems were so overwhelmed that doctors had to choose who lives and dies. Despite the significant number of deaths in CHSLDs, the province was never confronted with such situations.

Such conclusions are based on shaky comparisons. Let’s break it down.

Not all death are recorded…

Commentators often give pieces of data. Each state has its own way to record the cause of death. Sometime, only the people that have been tested or the people who passed at the hospital are taken into account, and not the one who passed at CHSLDs.

According to experts (French only), the only way to evaluate the actual death rate of COVID-19 is to look at the excess deaths by comparing the number of deaths since the beginning of the pandemic to the average at same period for previous years.

Respectable mass media like the New York Times, the Financial Times, and The Economist have special reports on excess deaths. In many countries, there were scandals accusing the authorities of hiding deaths related to the pandemic. In the United Kingdom, the excess deaths rose to 55,000 as of May 8; however, only 38,000 COVID-19 deaths were reported. This left 17,000 deaths unaccounted for. 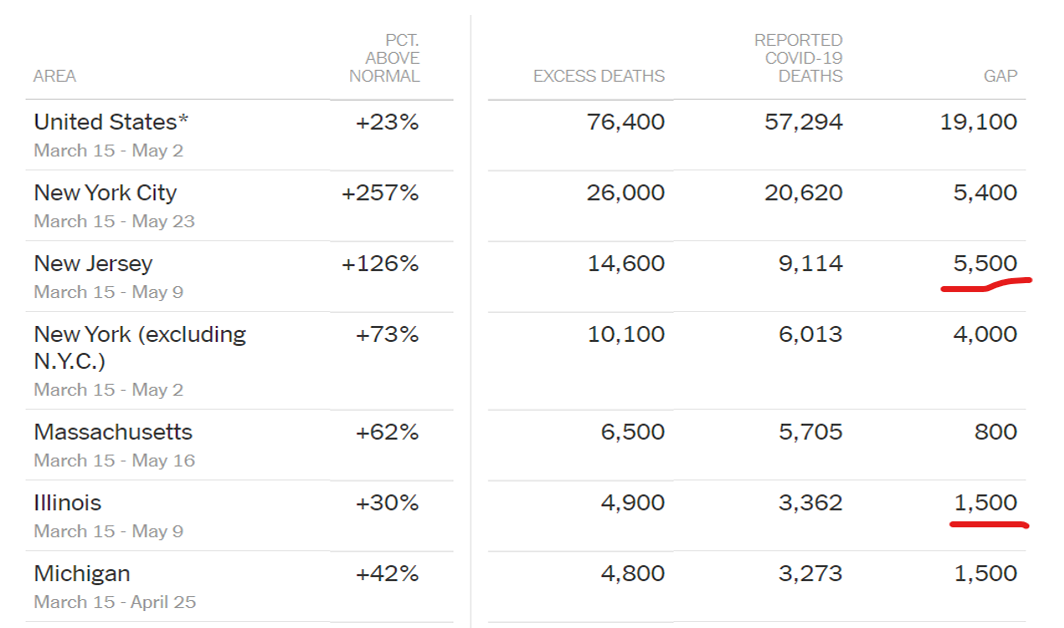 This New York Times table shows that as of May 9 in New Jersey, 5,500 more deaths had been officially reported. That’s a lot! In Illinois and Michigan, it was 1,500.

In order to vet the numbers of death from a geographic standpoint (city, region, country), the analysis should be conducted with similar data by using the excess death numbers, if possible, according to epidemiologists (French only).

By doing so, a less negative picture emerges for Québec. 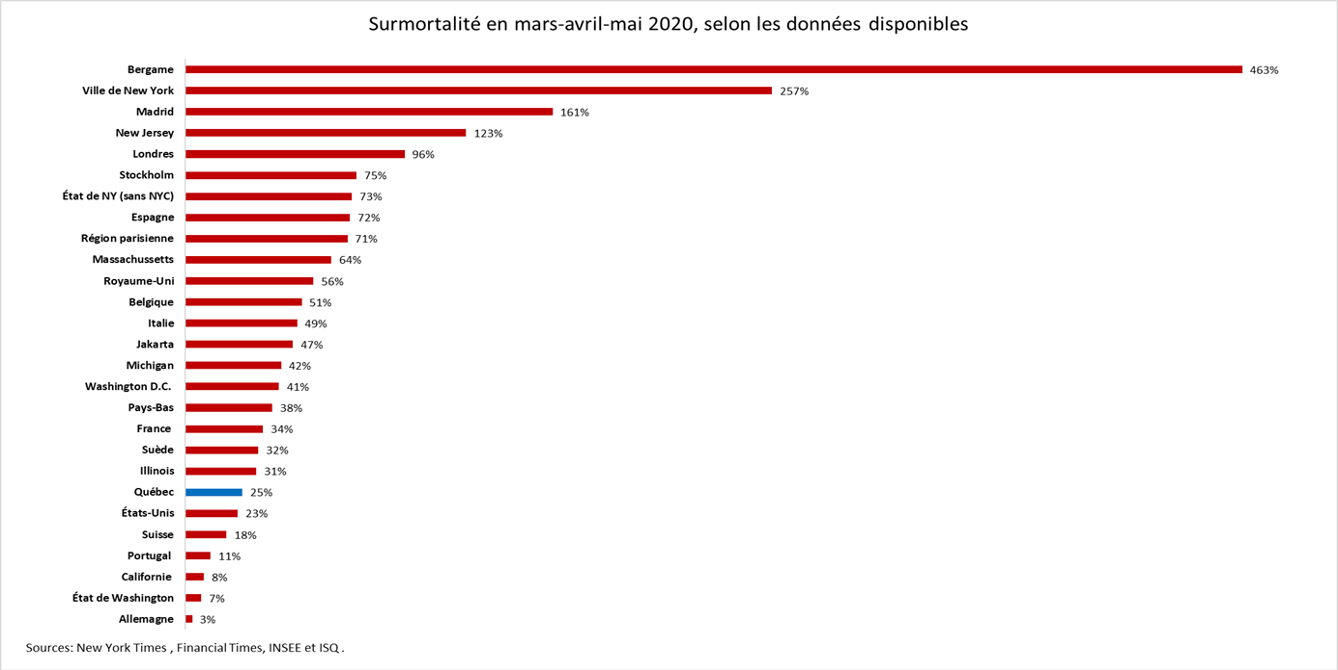 All COVID-19-related deaths were recorded in Québec.

On the other hand, other countries besides the United States and the United Kingdom have inaccurate data. Based on the numbers collected by international media, the death rate reported by authorities everywhere is seriously underestimated, with the exceptions of Belgium (French only)… and Québec!

Unfortunately, excess deaths numbers are not available everywhere. In fact, the data for Ontario is unknown.  In Québec , Institut de la statistique du Québec made the data on excess public on April 25 (French only)

Comparing Québec’s data to the United States is also questionable. The U.S. is a vast country that has urban areas that are heavily populated, as well as more rural areas with low population density.

Although some Québec regions are sparsely populated, the fact that the population of the Greater Montreal, 4.1 million people, is almost half of the province’s population. In addition, as we will observe later, the Pacific region, from British Columbia to Los Angeles, has been relatively spared.

To make a fair comparison, we should compare ourselves to states from the same geographic area, such as New York, Massachusetts, New Jersey or Connecticut. These states have highly populated and less populated areas, like Québec. When comparing ourselves with those neighbouring states, we are able to observe that we have been less affected by the virus by far.

In fact, when comparing northeastern cities like Montreal, Boston, New York, or Washington, Québec numbers are the most encouraging by far!

American states from the northeastern area

Geographic regions were not hit equally

It might be tempting to compare Canadian provinces and come to the conclusion that one succeeded while the other failed. Yet, all major geographic areas in North America have not been hit the same by the virus. Urban areas from northeastern areas like Montréal, Boston, New York and Washington were most affected, while in the Pacific coast, regions like Vancouver-Seattle, Portland, San Francisco, and Los Angeles were less affected by the pandemic.

As of May 31, the mortality rate by COVID-19 in the Pacific coast was 101 deaths per million, whereas in the northeast, it was almost 10 times as high, with 938 deaths per million. What could possibly explain such a difference?

For now, nothing is certain. It could be the origin of the pandemic. In the Pacific coast states, the virus came from Asia, where the spread of the virus was contained shortly. Meanwhile in the northeast, the virus came from Europe, a region where it was not contained. In Québec, we know that the March break and the fact that the borders were open played a significant role.

The Montreal area and the rest of Québec

When addressing Québec’s numbers, it would be important to analyze the different realities between the Montreal area and the rest of the province.

In the following table, it is possible to see that even if the Montreal region was hard-hit, it was much worse in cities like New York. However, Montreal was hit in a similar way to cities like Detroit and Boston.

The figures show that it is hard to compare dense urban centres with less populated areas. In this pandemic, there are more similarities between Boston and Montreal than between Montreal and other Québec regions.

Conclusion: Québec’s numbers are not the worst globally

It is easy to make it look as if Québec was among the areas with the worst mortality rates worldwide, but it is a matter of choosing the right comparisons.

When compared to areas in Europe where the virus hit the hardest, Québec numbers are far more encouraging. When compared to similar northeast geographical areas, Québec’s mortality rate is the lowest. If the death excess method – recommended by epidemiologists – is used to paint the real picture, it is possible to see that Québec is one of the only areas in the world where no COVID-19 deaths are unaccounted for. Finally, if the pandemic did hit Montreal hard, the situation is different for the rest of Québec that show encouraging numbers.

The COVID-19 pandemic resulted in many deaths in Québec.

No one can deny the impact of the pandemic in CHSLDs, but to exacerbate the numbers to make it look among the worst on an international scale is an insult to the population of Québec. Public health experts have established that Quebecers have saved millions of lives by staying home. In a projection (French only), they showed that without the quarantine, there would have been up to 10 times the number of deaths between April and May.

We should probably congratulate them!