Another lockdown for Québec?

The question itself is depressing. Let’s be real: spring wasn’t all that easy, and nobody wants another round.

Disliking or hating the virus won’t miraculously make it disappear. Ignoring the facts doesn’t work. The virus is still around. If we do not act accordingly, we’ll all collectively suffer the consequences again.

Does this mean that Québec might have to close completely again this fall? Short answer, no, but it’s more complicated. In fact, there are two possibilities.

We have a choice

On the one hand, if everybody diligently follows the public health updates, and if we get back our collective spirit from last spring, the lockdown will continue to be lifted gradually. Best-case scenario, this is what we want. Fewer people are sick from the virus and a faster economic recovery.

On the other hand, nobody’s perfect. We cannot expect everybody to be a public health role model. Whoever never took a break from social distancing should cast the first stone. It’s normal. We are human, perfection is unattainable.

What does living in an imperfect world mean? It means that we’ll probably witness outbreaks in some regions or economic sectors this fall. And if we’re not careful enough, these outbreaks might spread, forcing a partial closure of the economy. However, if we’re careful, the situation will not escalate, as we’ll be able to control small outbreaks to avoid the worst.

In Québec, we learned about COVID-19 the hard way during the spring. At the peak of the pandemic, our numbers were not reassuring. To say that Québec had the worst numbers globally would be to exaggerate the numbers, but still… The virus didn’t spare us.

Fortunately, things have changed, and we were able to regain control of the situation in seniors’ residences. During the summer, the daily number of new cases went way down. This was the result of our efforts to flatten the curve of the first wave. It wasn’t a miracle. 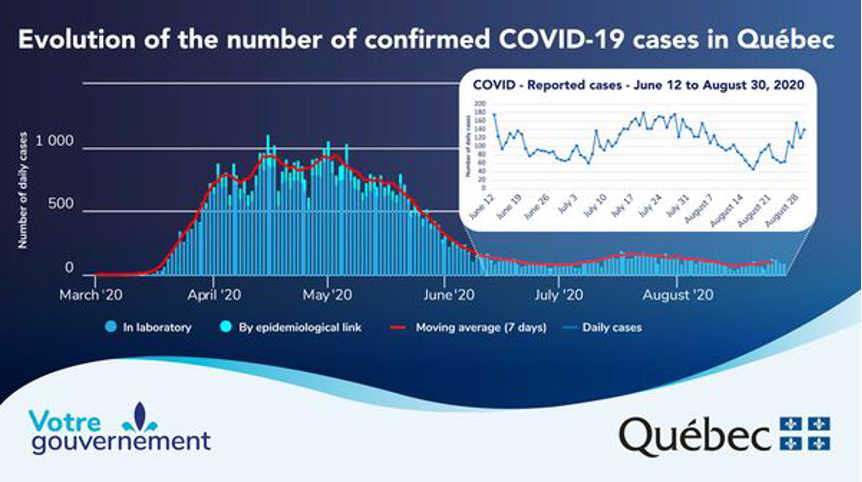 The good news is that our economic results have been encouraging. We have already recovered a good part of the jobs lost before the lockdown. There is evidence to show that the economy has recovered faster in Québec than in other provinces.

Summer slowly turns into fall, and the number of cases is on the rise. The situation is not dramatic, but these past few weeks, there has been a clear trend upward. A reminder that we are not sheltered from a full return of the virus.

If the end of the first wave was the result of discipline; the new upward trend is the result of letting go. It is the result of family dinners and nights out with friends, and the irrepressible desire to sing Dancing Queen huddled together in a karaoke bar. It’s the result of so many minor acts, as well as some completely irresponsible behaviours. 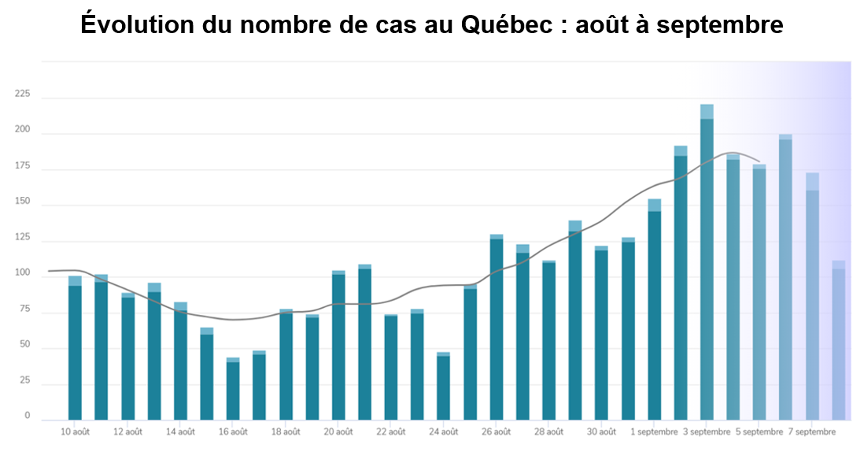 We are not the first globally to see the numbers rise. Many other countries overcame a first wave — like here in Québec — but are now facing a second one.

Let’s take France as an example. In the spring, the French were amongst the hardest hit in Europe. During the summer, the number of cases went down, and life slowly went back to semi-normal. There was even a special edition of the Tour de France!

The Tour de France did take place, but the period of calm did not last. In the last few weeks, France broke its record of daily new cases from spring many times over. With this new peak, there are about 10,000 confirmed cases daily, or about 147 cases per million inhabitants. Québec, at a similar rate, would have about 1,247 cases daily. It would seriously start to look like a second wave. 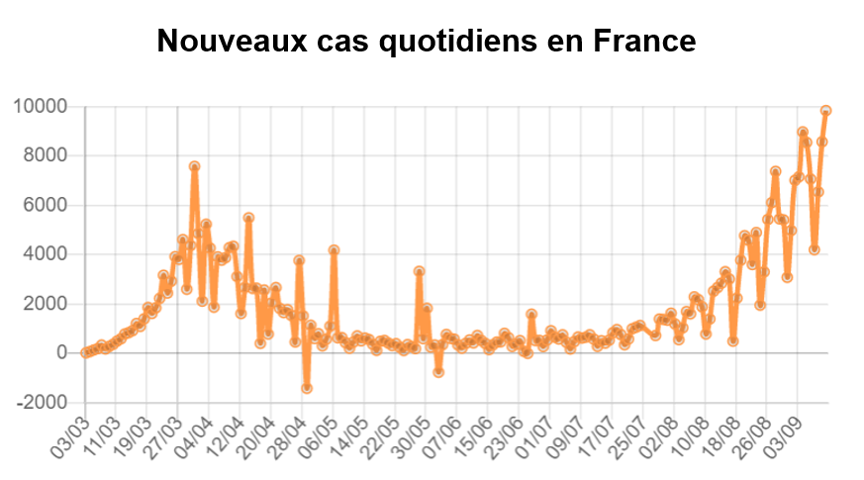 But we haven’t reached that point here. For now, the numbers are about 20 cases per million inhabitants, or about where France was at the end of July. In France, the second wave came after a period of letting go, and an outbreak much bigger than what we are currently observing in Québec.

This comparison is at once encouraging and scary. In reality, we are not safe from this. We could be just a couple weeks behind France. If we are not careful, we could also be back to a high transmission level. We might have to close parts of our economy.

Let’s be pessimistic for a moment, and imagine that Québec follows down France’s path. If, mid-November, we have the same number of new cases daily that we had last spring. Would that mean a total lockdown for Québec?

The answer is no. Last spring, we were less aware of what we had to do. We had to act carefully in order to face the unknown. Our testing ability was less developed. We did not know exactly who were the most vulnerable people or where the contagion was the most dangerous. The most cautious thing was to close everything, to reduce risks as much as possible.

This all means that this time, we’ll know better who to look after and what to look for in order to stop the contagion, if it all becomes necessary. Our ability to test is here. We can identify new outbreaks quickly, before they spread, so it will not be necessary to undergo a complete lockdown and to jeopardize the incomes of thousands of Quebecers. 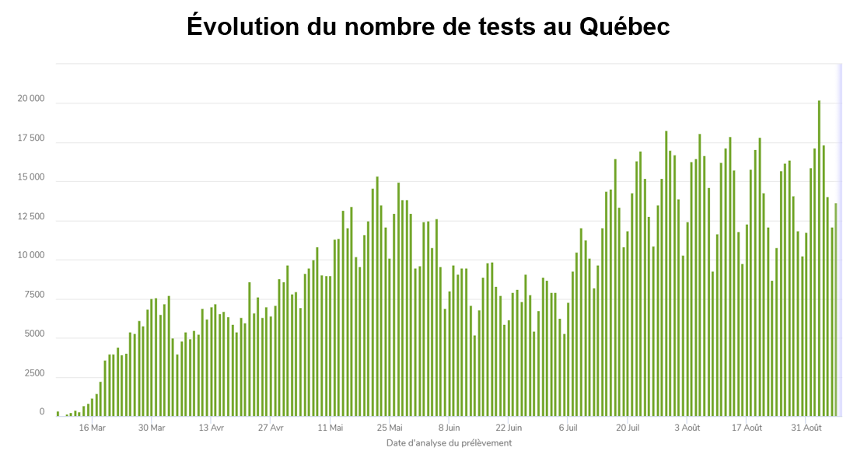 Have you ever heard about Tomas Pueyo? If you had asked me a few months ago, I would’ve said no, like most people.

Tomas Pueyo is a Franco-Spanish engineer. He was relatively unknown, but that changed last March. On March 10, he published an article urging the implementation of fast, strong measures to stop a COVID-19 outbreak. He suddenly became very popular. His article was viewed millions of times by everyone, including CEOs and politicians from around the globe. Many got the now-famous expression “to flatten the curve” from the article.

Fewer than ten days later, he published another article that confirmed his views. He compared the first series of measures against the virus to a Hammer strike. The countries that closed their borders, their schools, and a good part of the economy had hit hard enough to flatten the first wave.

However, the most interesting part of his article was about what happens after the first wave. After the Hammer’s strike, we’ll have to learn how to dance with the next waves of contagion, says Pueyo. We have to learn the right moves to stop the spread of the virus before another wave crests, without having to use the Hammer again.

Pueyo’s metaphor is useful to understand what is going on right now. If we want to be in control of the health crisis, without having to compromise the economy, we’ll need to learn the right dance moves. If the cases increase, we’ll need to put in lockdowns, whereas if they decrease, we can lift restrictions.

We have to be able to act with surgical precision in order to suppress the virus as soon as it appears, without having to stifle the economy.

Surgical strikes against the virus

In Québec, we now have a regional alert system. It has four alert levels: green for where the contagion is under control, yellow for where control weakens, orange for where the situation is getting serious, and red for the highest level of alert. 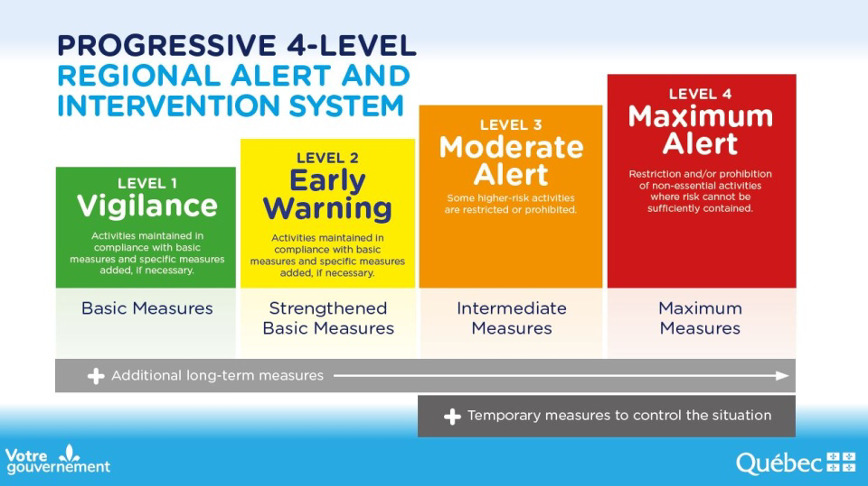 If another lockdown is necessary, it will happen accordingly to the contagion level of a specific region. If the situation were to get out of control in Laval, some businesses might close, but it wouldn’t affect those in Montréal or the rest of the province. Similarly, Gaspésie won’t be in red because things are not going too well in Outaouais.

This essentially means that we won’t put Québec completely under lockdown all at once, like in spring. Even if we were to put some specific regions under lockdown, we would first target the most problematic sectors — where the public health measures are not implemented properly. For example, we might close bars, but not schools, like in British-Columbia.

By being aware of the alert system and continuing with mass testing, we should be able to dance with the virus, and to hit back in a surgical manner. We should not have to entirely shut down Québec.

Worst-case scenario, some areas in some regions could be put under lockdown for a while. Best-case scenario, the population continues to respect public health measures, and we’ll continue to progress carefully with reopening.

The choice is ours!