Marguerite Blais will represent the CAQ as a candidate in Prévost

The leader of the Coalition Avenir Québec, François Legault, is very proud to announce that Marguerite Blais represent the CAQ in the riding of Prévost during the next general election. Mr. Legault is delighted to be able to count on this respected figure of Quebec policy, who makes the improvement of the quality of life and the care of seniors and caregivers her biggest priority.

The new CAQ candidate has already submitted several very interesting proposals to François Legault who is working to add them to the electoral platform of the CAQ for the next election. “It is high time for Quebec to adopt a real national policy for caregivers. The work that these people do with their loved ones who are sick is too important for our society to not be recognized. We must give them the tools and support they need to carry out their mission. The CAQ will also ensure the creation of a series of Gilles-Carle houses over the next few years. I hope that caregivers from all regions of Quebec can enjoy these homes. There is also a need for more initiatives in social geriatrics in Quebec, as Dr. Julien does with social pediatrics. Teams are needed to provide services to our elders. We must also fight against the social isolation of seniors. Quebec is not doing well at present, and we need to break the isolation of too many of our seniors. We must also improve the quality of life in our CHSLDs and make them attractive living environments. It is also necessary to enhance the value of the occupation of beneficiary attendants, “said François Legault.

The best vehicle for the cause of seniors

Marguerite Blais she has listened to her heart by joining the CAQ team. “For me, it is clear that the CAQ is the best vehicle to advance the cause of seniors and caregivers. We are the second largest society in the world to age the fastest. There are too many caregivers in Quebec for nothing to be done to improve their living conditions. There must be policies put in place, it must become a real social issue which we discuss publicly. I am delighted by the attentive listening I experienced while talking with Mr. Legault and his team. I am very proud to join them, “said the CAQ candidate.

Adequate services for the region

A resident of Saint-Hippolyte for many years, Marguerite Blais is well aware of the issues surrounding the new riding of Prévost. “The riding was created because the population growth in the area has been very large in recent years. There are many advantages to this because it adds dynamism to the region, but it also creates new needs in terms of services to citizens. The services must follow the needs. The health system in the Laurentians has for too long been underfunded compared to other regions and the consequences have been very serious, particularly due to  the aging of the population. Also, the citizens of Prévost have long mobilized for the creation of a secondary school in this part of the riding. They are right to make this request. You can count on me to study this project carefully and to follow it up. Finally, in Ste-Sophie, I want to help the municipality solve the problem of contaminated land. We need to decontaminate to make possible the sale of these lands, “she concluded. 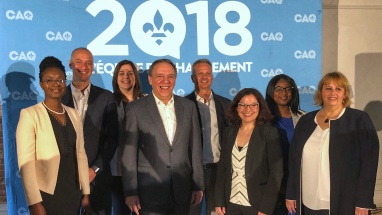 For François Legault, these new candidates on the island of Montreal show that the tea, for change is taking shape for the next general election. “The life course of our candidates is extraordinary. The diversity of their interests inspires me. They are in the image of the metropolis, “said the head of the CAQ.

François Legault wants to make Montreal a source of inspiration for Quebec. “You know, there are two Montreal: festivals, restaurants, tourism, startups, universities, but there is also another Montreal that we do not talk about enough: Montreal every day, that of families. We need to meet the needs of both Montreal. An economic engine, a business incubator, but also a place where you can raise a family, a city where life is good, “he explained.

Montreal belongs to all Montrealers.

The head of the CAQ argues that for too long the Liberal Party has taken Montreal for granted. “One of the proofs is the state of schools in Montreal. Schools of the Montreal School Board are among the worst in Quebec. They fall into ruins. The Liberals have allowed schools to degrade for too long. More and more families are thinking of moving to the suburbs. After 15 years, it is time for these families to say what they think of the Liberal government. We have built the team for change for them, with October 1st in sight. The island of Montreal does not belong to the Liberal Party. It belongs to all Montrealers and all of Quebec, “concluded François Legault.

Candidature announcement for Pointe-aux-Trembles : Chantal Rouleau will represent the CAQ 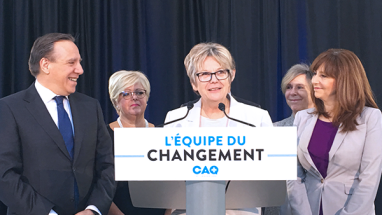 The Coalition Avenir Québec marks an important move in in recruiting the mayor of the neighbourhood Rivière-des-Prairies-Pointe-aux-Trembles, Chantal Rouleau, who will be the candidate for the riding of Pointe-aux-Trembles in the 2018 general elections. The leader of the Coalition Avenir Québec, François Legault, is extremely proud and honoured to be able to count on a woman of such magnitude as a part of his team on the island of Montreal.

Chantal Rouleau intends to use her accumulated experience in recent years to continue serving the citizens of her riding. “I am first and foremost a woman from East Montreal. It’s my home,and it’s my passion. Many decisions that have impact here are made in Quebec City. I am thinking in particular of public transit, which is a big concern in eastern Montreal. The riding of Pointe-aux-Trembles has enormous potential. But to develop paying jobs, create wealth, enhance the territory, you need the will, the courage and the political power. I have this desire and I want to look for ways to achieve it on October 1st 2018″, she said.

The CAQ candidate affirms that it is more than necessary to improve the public transportation in the East of Montreal. “ Until now, there have not been any propositions for public transport in the East of Montreal. Our neighborhood has been abandoned by the liberals. This era is coming to an end. A CAQ government is prepared to study all the possible projects in order to find the most advantageous solution at the best cost possible” assured Chantal Rouleau.

A strong message to Montrealers

For François Legault, Chantal Rouleau’s candidature sends a strong and clear message to Montrealers : “We are serious. Montreal can and must be a part of this change. As you can imagine, Chantal has the experience and the influence to make the voice of Montreal heard in a CAQ government. I am very happy and very proud to count on her. Chantal : welcome to the team for change”, highlighted the leader of the CAQ.