By-election: It is time to give a valuable lesson to the Liberals, says François Legault

«Quebecers need to sanction the Couillard administration for their inaction and little integrity during the by-elections that will be held this autumn. » This point was hammered home this Thursday by the leader of the CAQ, François Legault as he was introducing his two female candidates for the elections of the ridings of Marie-Victorin and Verdun.

«It is time to give a real lesson to the Liberals» said the CAQ leader, reminding us that the events that took place over the last few weeks have proved the poor ethics of the Liberals and their demagoguery.  «Whether we are talking about ethics or integrity, the Liberals only behave as they please. From Jean Charest to Philippe Couillard, we witness the same arrogance. The government has no excuses. The same faces, the same team is in charge in Quebec since 2003. Philippe Couillard pretends to know better than the Quebecers themselves what is good for them, but believe me that this autumn, the citizens of Saint-Jérôme, Marie-Victorin, Verdun and Arthabaska will express their dissatisfaction of his government» stated François Legault in the company of his two candidates.

More than ever, the Quebecers have the desire to put an end to the issues of integrity and ethic within the Couillard administration. To make this happen however, we have to send new faces to the National Assembly stated François Legault. «This is by voting for Julie Chapdelaine in Marie-Victorin and Ginette Marotte in Verdun that the citizens can really sanction the Liberals. Our candidates belong to two different generations but they represent the same Quebec: the Quebec that works, pays its taxes, that is involved in its community, that wakes up each morning and has the desire to take charge of its own destiny. The real Quebec! By 2018, we need to take advantage of every opportunity to send a clear message across Quebec: the Liberals must stop mocking us! » maintained the leader of the CAQ.

In Verdun, the responsibility to carry the colours of the CAQ comes back to Ginette Marotte, former mayor of Verdun and city councilor for Montreal. After a break from political life to take care of her mother who was battling cancer, Mrs. Marotte is ready to get back in the political arena and is willing to make the dignity of the elderly a priority. In Marie‑Victorin, the CAQ presents Julie Chapdelaine, a woman who comes from the restaurant sector, where she held many managerial positions in several establishments. Mrs. Chapdelaine is currently completing a bachelor in Management at HEC Montreal. 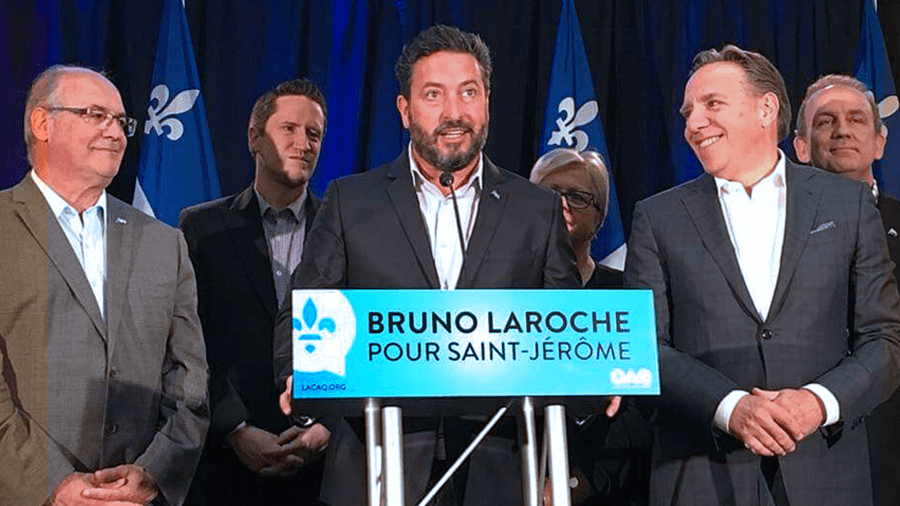 On Thursday, CAQ Leader François Legault announced that the prefect for the RCM of Rivière-du-Nord and mayor of Saint-Hippolyte, Mr. Bruno Laroche, will be wearing his party’s colors for the upcoming by-election in Saint-Jérôme.

“Bruno is a passionate man. He is very familiar with the region. We couldn’t have asked for a better candidate. He is a major political player in this community. He is close to the people, he knows their concerns, and he is ready to fight for them. His municipal experience reveals a proven track record”, stated the CAQ Leader.

“During the years, and throughout the tasks assigned to me in the municipal, I have developed a very thorough knowledge of the issues that matter to the citizens of this region. I am convinced that the CAQ is the only party that can relate to these matters, and that is ready to replace the Liberals in 2018. I sincerely feel that I am the most suitable candidate to represent the citizens of Saint-Jérôme. I will fight at the National Assembly to make sure that their utmost concerns echo throughout Québec!” expressed Bruno Laroche.

Although the campaign hasn’t officially started, Bruno Laroche openly stated that matters of health will be among the hot topics. “The access to health services in Saint-Jérôme is disappointing. Gaétan Barrette’s Liberal reforms are failing miserably here in Saint-Jérôme”, stated Mr. Laroche, providing factual figures.

“Our health system is overwhelmed, often leaving our patients overlooked. This situation must not persist; for over 13 years, the Liberal approach has been proving to be ineffective. And have you heard the PQ address health matters recently? The answer is no! The PQ is completely out of touch, and cares only about its leadership race, internal debates, and referendum”, continued François Legault.

The CAQ Leader guarantees that his party will deliver a creative campaign that will touch the citizens of Saint-Jérôme. “Bruno’s campaign will address your very concerns; in topics like health, preschool at 4 years, and high-paying job creation. He will also defend the public against further tax hikes. The citizens of Saint-Jérôme will have the opportunity to be represented by a strong voice that will carry their message to the Liberals. That voice, is the voice of the CAQ”, concludes François Legault.

Mr. Laroche made his hands-on debut in politics as city councillor for Saint-Hyppolite in 1997. The field man, who is well known in the region, has been its mayor since 2009. He has also been a prefect for the RCM of Rivière-du-Nord since 2013. For nearly two years now, he has been the president of the Laurentian board of prefects. He is also a father of three.