“We succeeded in delivering our commitments to Quebecers. “ 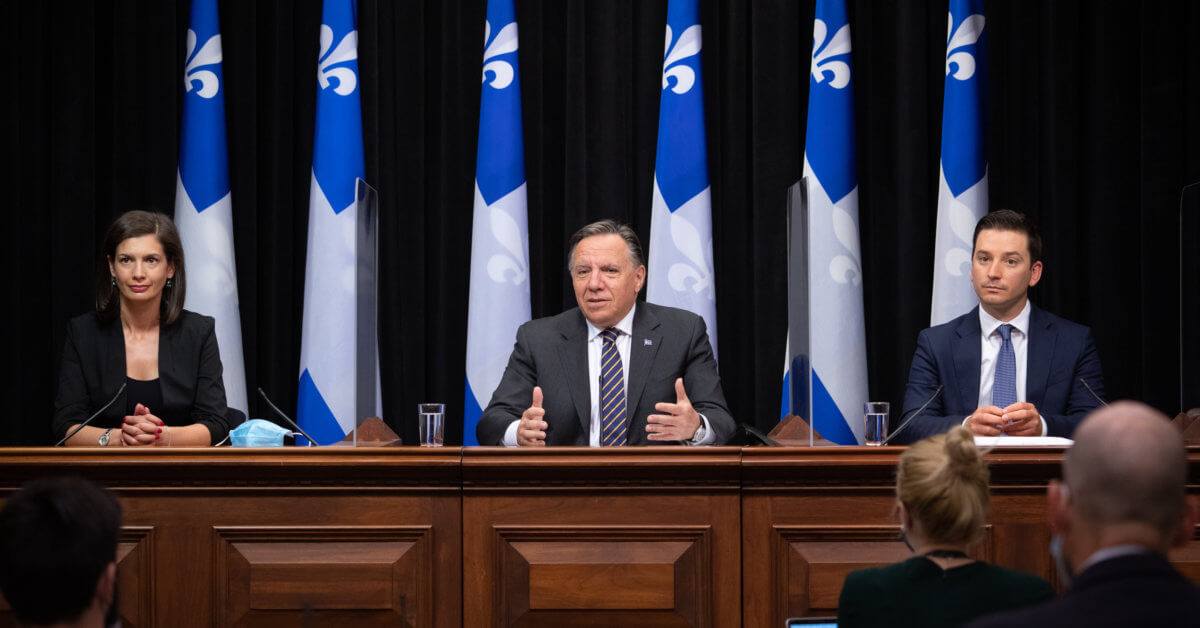 Premier François Legault, accompanied by Deputy Premier and Minister of Public Safety Geneviève Guilbault and Minister of Justice and House Leader Simon Jolin-Barrette, took stock of the parliamentary session that ends today. “The battle against COVID-19 has kept us very busy in the last few months, but at the same time, we have continued to advance our five priorities: education, the economy, health, the environment, and the sense of pride in being who we are. We have succeeded in delivering many of our commitments to Quebecers,” said the Premier.

Thanks to the admirable work of the staff in the health network and the exemplary collaboration of the Quebec population in defeating the third wave of COVID-19, Quebec is on its way to winning the battle. “We have resisted the third wave much better than anywhere else in the world. We are one of the nations with the best vaccination coverage, and everything is in place to succeed in our race to the second dose. We still have some work to do, but we are finally getting there. And this is thanks to the immense efforts of the population over the past 15 months. Thank you from the bottom of my heart to all Quebecers! “reiterated the Premier.

Despite the pandemic, several issues have moved forward. For example, the government introduced a bill to combat elder abuse and presented a national policy on caregivers, a first in Quebec’s history. Significant sums of money have been invested to tackle domestic violence, notably for the benefit of shelters. The government is also working on the follow-up to the Laurent Commission report; a national director of the DPJ, Catherine Lemay, was appointed on March 17 and significant investments were announced by Minister Lionel Carmant.

The greatest achievement of the past few months is that we have managed to keep our schools open despite the pandemic,” said François Legault. Quebec is one of the only places in the world where schools have remained open for the greatest number of days.

Minister Jean-François Roberge also announced the addition of professionals, and a vast tutoring program for students in difficulty has been put in place to help our youth.

The Quebec government’s commitment to success and economic development continued in 2021. In this regard, it is worth noting the investments of more than one billion dollars to connect all Quebecers by the fall of 2022 and to provide new high-speed Internet services in the regions. The government has increased its partnerships with the private sector to achieve this goal.

In terms of public finances, the government’s rigorous management resulted in the tabling, at the end of March, of a responsible budget totaling investments of nearly $15 billion over five years to enable Quebec to recover from the height of the pandemic and to set the course for a balanced budget without raising taxes or making cuts.

On the environmental front, the government continues to take concrete action on all fronts. For example, a proposal to expand the deposit to all ready-to-drink beverage containers from 100 ml to 2 liters, whether they are made of plastic, glass, metal, or multi-layer cardboard, has been adopted.

On the energy front, a historic agreement was reached between Hydro-Québec, the private sector, and the Innu communities for the implementation of the Apuiat wind farm. This partnership with the Innu will contribute to the development of wind energy in Quebec, a renewable and green source of energy, at an advantageous and competitive price.

In terms of sustainable mobility, the government presented its mobility vision for the greater Capitale-Nationale region, the Réseau express de la Capitale (REC), which includes the Quebec City-Lévis tunnel, a tramway and service to the suburbs on the north and south shores. Dedicated public transit lanes are planned in the inter-river tunnel to connect the entire region, which will benefit the population of the Capitale-Nationale and all of eastern Quebec for generations to come.

Bill 96, introduced in May, demonstrates the government’s commitment to the protection and promotion of the French. This unprecedented step will also enshrine in the Canadian constitution that Quebec is a nation whose common language is French. The government has continued its plan for economic recovery in the cultural sector.

Finally, earlier this week, the government rolled out its Blue Spaces concept, which totals $259 million in investments to create a cultural, social, and tourism network based on our rich heritage. “These will be spaces of beauty to celebrate Quebec’s successes and heroes. And I am convinced that this will grow our collective pride,” said the premier.

“We are turning the page on another session, still marked by the pandemic. But, for the first time since the beginning, we finally have the feeling that we are winning the battle. We’ve made it through the winter by bringing the virus to its knees. And at the same time, we have managed to continue to deliver on our commitments to Quebecers. I am very proud of the work of our entire government team. We must not lose sight of our major mission for the summer: to get vaccinated with the two doses. If we manage to do that, the summer of 2022 will be the summer of connections! “

Adoption of Bill 77 to create the Institut de technologie agroalimentaire du Québec
This bill, which has been requested for many years, ensures the long-term development of the Institute by allowing it to be more autonomous and by reducing the administrative constraints in its human resources management. (March 10, 2021)

Passage of Bill 67 to better support municipalities
This bill will allow municipalities and regional county municipalities (RCMs) to participate t in economic recovery and to be better equipped to deal with emergencies, such as floods and pandemics. (March 26, 2021)