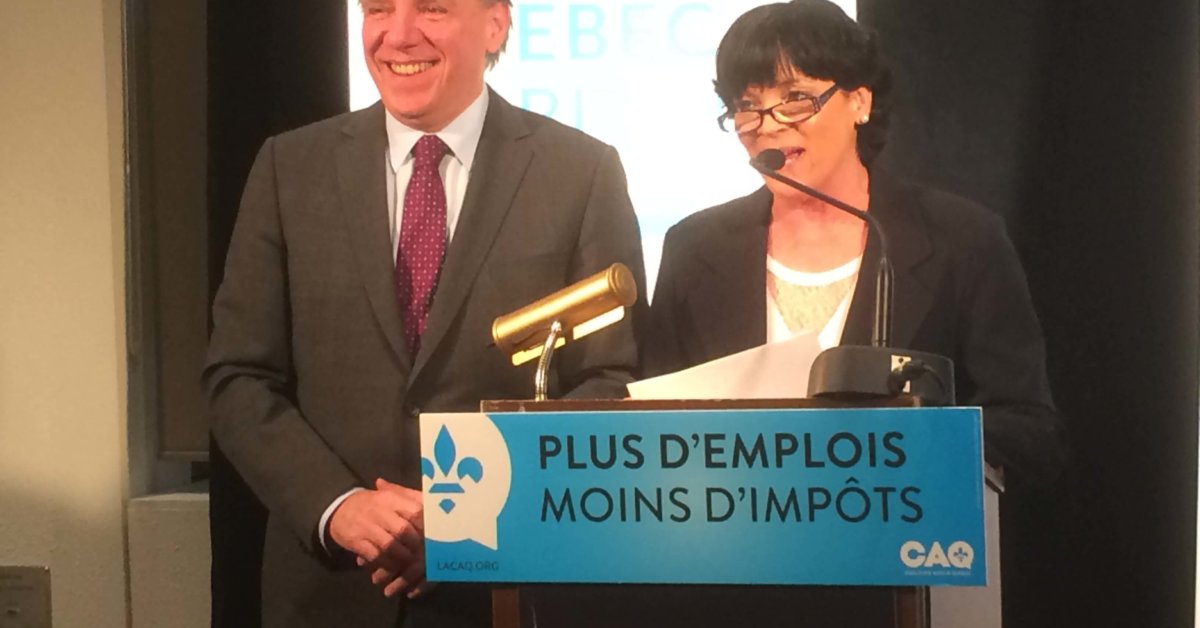 Coalition Avenir Québec proudly presents its candidate for the by-election in Chicoutimi: Hélène Girard. The CAQ Leader, François Legault, made the official announcement on Tuesday, during a visit to various economic and political actors of the region.

Originally from the region, Hélène Girard has been working in the Saguenay media world for over 30 years. In particular, she was a radio host for CJMT and CFIX for over 20 years. Now a marketing consultant, her objective is to represent with pride the citizens of Saguenay at the National Assembly. “It is my pleasure to represent Coalition Avenir Québec in Chicoutimi. I am a proud resident of Chicoutimi. I hear and understand the challenges of the region, where people are smothered by the taxes that are implemented by this spineless Liberal government; they prefer to dip into taxpayers’ pockets rather than to cut in the bureaucracy and stimulate the economy. I find it outrageous that in 2015, 1200 jobs were lost in Saguenay. In that period of time, 115 families had to turn in the keys of their residence to their creditors. How can we stay idle and accept this? Couillard’s government has abandoned us. Today, my deep and sincere desire to improve the living conditions of the middle class, is what drives me to get involved in politics”, she supports sympathetically, being herself a mother from the community.

Mrs. Girard believes that the CAQ is the only political party that can end the Liberal monopoly, by uniting nationalists in a project for economic recovery. “I believe that the only true option for a change is the CAQ, a party that sees job creation and economic revival as real priorities. Only the CAQ proposes to put money back in the pockets of taxpayers. Only the CAQ recommends to provide the regions with the tools required to fulfill their economic potential. And finally, only the CAQ makes the fight against school dropout a true priority, and does not put in compromise our future generations”, declares the business woman, filled with passion for her community.

Her involvement in the community is remarkable: She is a lifetime sponsor in the Walk for Hope (Marche de L’espoir), to research multiple sclerosis, and she was also the Telethon host for cerebral palsy during five years

François Legault had no doubt that the candidate wearing the colors of the CAQ, will be someone from the region. “Hélène Girard was born in Chicoutimi. She has worked in Chicoutimi. She is well respected in her community. She understands the concerns and is aware of the priorities. Saguenay had a very rough economic year. I am telling you loud and clear, our priorities for the campaign are: Economy, economy, economy”, supports the CAQ Leader.

François Legault adds that the CAQ has already proposed many ambitious measures for the creation of remunerating jobs and reducing the financial burden. “I see fit here, the creation of a $5 billion Fund to revamp the manufacturing sector that will enable local companies to invest in state-of-the-art technology, in machinery and equipment to become more competitive. More investment in our businesses will yield more jobs, and more wealth. We also propose a $500 tax reduction per citizen, applicable starting next term, in Quebec. The CAQ’s two blue cornflowers are for our two guiding values: Pride and prosperity”, he concluded.